Conditions on the Hong Kong/China to Europe route seems to have stabilised, with rates seemingly having reached their peak and remaining at the same level for a couple of weeks now. There is certainly more equipment available, and we are getting the space we need on vessels. Unfortunately, this is not the case for cargo coming out of other countries in Asia. It’s almost impossible to obtain a booking out of Malaysia, and this week we were quoted the highest rate we have seen yet, at US$14,000/20’ and US$17,500/40’ from Port Kelang to Southampton, with no guarantee of shipment this side of Chinese New Year. Freight rates look set to continue at record levels well beyond Chinese New Year. The previously anticipated drop now looks unlikely, with Chinese factories sitting on a large volume of orders and shipping lines are looking at full vessels for a considerable period. This chart shows the Shanghai Containerised Freight Index over a two year period to the end of December.

With regard to container availability, Industry observer Container xChange operates a Container Availability Index which tracks millions of container moves to monitor and forecast equipment availability. An index of 0.5 describes a balanced market, below 0.5 a shortage of containers. They have highlighted a ‘positive trend’, with values for 20-foot containers and 40-foot containers improving to 0.34 and 0.37, respectively, indicating much higher availability of empty containers than last month. Although the latest figures for January are still well below 0.5 and thus represent a shortage of available containers, those figures are beginning to resemble the ‘normal’ level of container shortfalls experienced for major Chinese export markets.

China’s Ministry for Commerce is again looking to step in to stabilise the container shipping market. “Our ministry is in talks with the ministry of transport and other related departments to adopt measures to increase shipping capacity and stabilise freight rates,” said Li Xingqian, head of foreign trade, according to Lloyd’s List. Media speculation indicates that shipping lines could be called to a series of meetings to discuss the container shortage and high rates. However, in Europe, joint representations by the European Shippers Association and forwarders association CLECAT to the European Commission have been unsuccessful. The Commission determined that shipping lines operating under market conditions brought about by the pandemic are not abusing their exemption from anti-trust laws. Shipping lines must seek renewal of the exemption every four years, that last occasion being April 2020. The Directorate General of the Commission stated that they can only examine the situation when the formal review of the Consortia BER is relaunched in 2024, or if there is a legal complaint. The DG nevertheless acknowledged that the situation calls for a global overview and for renewed discussions with maritime competition authorities worldwide. There is speculation that some form of legal action might now be pursued by the respective associations.

In a surprise move, shipping lines have announced a number of blank (cancelled) sailings in the post-Chinese New Year period. It was expected that all services would operate normally due to high cargo volumes, but the rationale being given is that this is an operation move to reduce congestion in European ports and enable to the supply of empty containers to be replenished. Maersk Line has advised it customers that the blankings were needed to “improve schedule reliability”, to “free up these services for schedule recovery measures” in response to “severe port congestion and equipment limitations”. Fortunately, the services earmarked for cancellations are not those we use in the normal course of our business, but it will add pressure to other services because of displaced demand.

Around 35% of all cargo which is transhipped at major hubs is being rolled over from the intended vessel to the following sailing. In Asia, the figure is closer to 50%, and covers services from countries such Indonesia, Malaysia, Vietnam and Thailand, which have few or no direct calls for the largest vessels

Schedule reliability is certainly an issue. The measure for an on-time arrival is within 12 hours of the scheduled time, and in normal conditions, average reliability across all lines is somewhere between 75% and 80%, with the worst offenders still in the mid 60% range. Currently, average reliability is at just over 50%, and vessels are waiting for berths at congested ports around the world. Average slippage for UK ports is 4-5 days, and there are still more than 30 vessels waiting to berth at Los Angeles/Long Beach, resulting in a berthing delay of 10-14 days. Yesterday, winds gusting to 55 knots (63 mph) and 17-foot seas forced 17 ships – 14 container ships, two tankers and one cruise ship – to leave spots at which they were anchored for better cover from the elements. Most of the ships went south from Los Angeles and Long Beach, seeking shelter in front of Catalina and San Clemente islands. The Port of Los Angeles/Long Beach is now offering incentives to terminal operators  to move containers off the terminal faster. The scheme starts on 1 February and terminal operators that cut their truck turn time between 5% and 20% will receive $0.50-$2.75 per 20’ equivalent unit, with the compensation rate increasing according to the degree of improvement.

I recently reported on the ONE Apus which lost approximately 1850 containers overboard in the Pacific, the worst loss since 2013, but last week brought news that the 13,092 teu Maersk Essen had also lost around 750 containers overboard in another Pacific storm, this time close to Hawaii. Around 100 containers were seen floating 100 miles north-west of Honolulu in a semi-submerged state. Maersk this morning moved to take down drone footage showing the collapsed stacks on the vessel which had been posted online. They were initially slow to release information on the incident. The vessel ran into trouble on 16 January, and Maersk did not issue a press statement until 21 January and still no mention of the incident on Maersk’s public website. There are fears that these losses could bring about new regulations for loading of vessels, resulting in reduced load factors. The yearly worldwide average for containers lost overboard in recent years has been around 1000 per year in total, so these two incidents represent a significant increase. Containers lost overboard represent a considerable hazard to smaller craft, and many losses of fishing vessels have been attributed to them either having hit a container, or ‘caught’ one in their nets. After short period, they will float with only the top surface visible, rather like a piece of driftwood, until they gradually start to let in water. For while they will sit just below the surface, and this is when they are most dangerous, until they eventually sink. Occasionally, depending on the proximity to the coast, they are washed ashore.

There have been surprisingly few delays at the Port of Dover and the Channel Tunnel entrances since the UK exited the Brexit transition period on December 31st. There are two reasons for this; the volume of trucks is still massively reduced when compared to previous times, and so far has only peaked at 40% of the normal volume and a third down on the same period last year. However, around 50% of the trucks going back to Europe are empty, and there have been stories of supermarkets paying for the empty return leg in order to turn the trucks around quickly and get back with produce. The second reason is that trucks should first go to Ashford Customs point where it’s currently taking around 6-8 hours to clear, and then to Manston Airport for a Covid PCR test. There are around 1000 trucks at Manston, and once the driver has a negative test , they can proceed to the port. Authorities are recommending drivers to get the PCR test before reaching Kent, but the vast majority are foreign and have no local knowledge of where to go. Inbound truck rates continue to set record highs, due to high demand as many companies refuse to operate the route.

Viewers of a new Channel 4 drama ‘It’s a Sin’, which started last Friday, may be able to spot the Royal Liver Building, our head office location, representing 1980’s New York in the next episode which airs on Friday 29th. The program was filmed in January 2020 and stars well known actors Keeley Haws, Neil Patrick Harris and Stephen Fry amongst others. I don’t know if it’s any good, so don’t take this as a recommendation!

That’s all for now. Stay safe 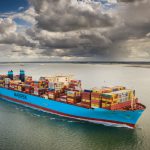